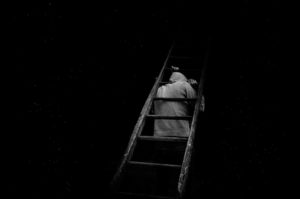 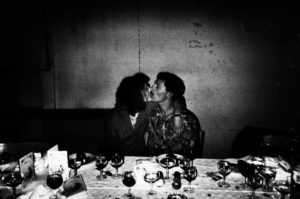 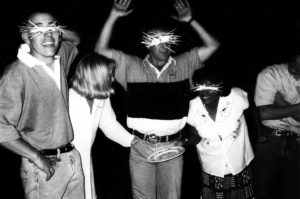 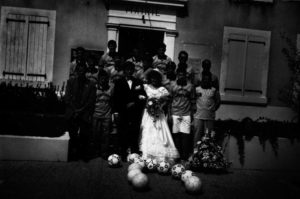 I took these images when I was a teenager, between the age of 10 and 17, in the village of Yvrac, in the south-west of France, where I grew up. At the time, I was taking a lot of pictures with a disposable camera during the many family reunions that took place and where

there was always something to celebrate - a baptism, a birthday, a wedding ...

These moments of festivities were of course only one aspect of our life, an escape after the work week. We never photographed the hardest moments. This is what struck me when I rediscovered these images stacked in a corner of my old room. Several people in these photos were suffering from illness or addiction, including my father, who died during this period. Others have lost their homes, families or jobs. These are the memories that were on my mind and totally absent from the images.

In order to find the forgotten part of my family’s history, I decided to reclaim them. Since we did not keep the negatives, I worked directly on the print, sometimes already damaged. By scratching the eyes, isolating details and bodies, or enclosing them in the darkness, I seek to give new life to these images, out of their reality, with the hope that these lost moments between the photographs will emerge.

The title of this series refers to a symbolic date, the summer of '98, which was a marker in my childhood life. I was barely ten years old and yet I remember that summer as the one of the first experiences - the experience of happiness, love and Death.

Born in 1991 in the south-west of France, Cédric Calandraud lives and works in Paris. He graduated with a master in sociology (EHESS) and a master in documentary filmmaking from the university of Paris VII.

He has received the Grand Jury Prize as well as the Exchange Prize with FotoLeggendo at the festival Les Boutographies in Montpellier in May 2018. His work has also notably been shown at the Rencontres d’Arles OFF in 2017 during the collective exhibition “Supernatural” and at the “What’s Up Photo Doc” fair in Paris in 2017.

He is a member of the Hans Lucas agency since 2016.