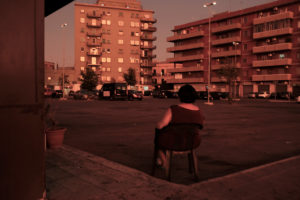 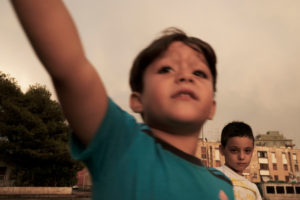 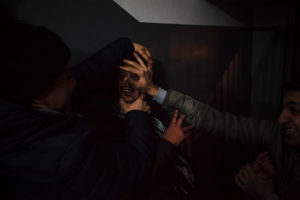 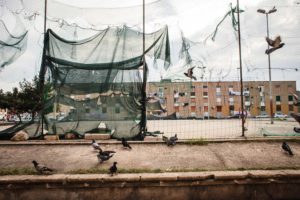 The Case Parcheggio (Parking Houses) were built in 1980 in the Tamburi district of Taranto, known for its closeness to Ilva, the largest steel factory in Italy and one of the most polluting industries in Europe.

Born to place people of the Old City following the earthquake in Irpinia, the Case Parcheggiowould have had to remain standing for a few months, waiting to be replaced by new houses. Almost forty years have passed, but those houses built with large quantities of tar and asbestos, without an adequate sewage system, are still there, a few steps from the municipal cemetery and from the steel giant that stands out against the backdrop.

The mineral powder used to produce steel, carried by the wind, is constantly breathed by the inhabitants of the place. "Wind days" are often spoken in Taranto, days when the wind that blows from the north pushes Ilva's dust towards the city. During these days, through municipal ordinances, they are invited not to go out. Many schools in the area remain closed and children can’t use the playgrounds.

A very few people in the neighborhood work for Ilva. On the other hand, everyone has breathed and continue to breathe poisons every day.

For many people the only answer to poverty, to the socio-health and environmental risk is religion, faith in God. For those who succeed, a way of making life in the small apartments dignified is to furnish them in such a way as to hide their constructive faults.

The complete absence of the Government and local institutions and the state of abandonment in which the district is located, have made the phenomenon of criminality in this area increasingly gaining ground. In Taranto, those who speak of the Case Parcheggio describe them as a ghetto-district, and many tarantini do not even know its existence.

Here I met people who found themselves facing a life that had little or nothing to offer, if not the risk of embarking on the path of illegality.

Here I discovered and lived humanity. And it is this humanity that I wanted and I will continue to tell.

Andrea Petrosino, born in Taranto in December 1978, lives in Rome.

He graduated in Political Science. At 34 he understood that it is through photography that he wants to tell the humanity he meets in his daily life.

So he starts to take pictures as a self-educated photographer and then he studies at the Master of Photojournalism, held by Emiliano Mancuso, at Officine Fotografiche Roma. At the same school he continues his training course with Tiziana Faraoni and Lina Pallotta.

Since October 2016 he has been teaching Photography at Officine Fotografiche Roma.